CORVALLIS, Ore. – Chance Nolan passed for 302 yards and two touchdowns, and BJ Baylor scored for a career-high 171 yards and three scores to lead Oregon State to a 45-27 victory. airy on Saturday night.

Nolan replaced starter Sam Noir in the third quarter of the Beavers’ season-opening defeat at Purdue last week and provided a spark. Coach Jonathan Smith opted to be with a hot hand against airy (1-2, 0-0 Mountain West).

“I thought he was faster,” Smith said. “We’re going with the stuff he’s really comfortable with and it showed. He turned out to be really effective.”

Nolan, who started the last three games after suffering an injury to Tristan Gebia, learned on Thursday that he will be in the starting lineup.

If Saturday’s performance was indicative, he could become a fixture as OSU’s early signal caller.

“In our position you have to prepare like you’re about to leave,” Nolan said. “You never know what’s going to happen.”

It didn’t take long for Oregon State to retain control in the second half.

Linebacker Riley Sharp intercepted Chevan Cordeiro’s short pass over the middle in the first game of the third quarter at Hawaii’s 30-yard line.

Baylor’s 30-yard touchdown gave OSU a 31–7 advantage in the middle of the ensuing game.

But Hawaii responded with successive touchdowns to get back in the game.

Calvin Turner Jr. scored a run of 1 yard. Baylor’s rumble in the Beaver’s 36-yard line set up a 10-yard touchdown pass to Nick Mardner, and Hawaii trailed 31-20 at 3:46 of the third quarter.

Hawaii linebacker Darius Mussau was called for the goal of Nolan’s tackle on an 11-yard run, and that penalty helped ignite a drive that struck Anthony Gould with a 13-yard touchdown pass in the first play of the fourth quarter. Ended with, giving the Beavers a 38 -20 lead.

Oregon State covered 558 yards and had excellent balance with 302 yards in the air and 256 on the ground.

“Defensively we were terrible,” said air coach Todd Graham. “So frustrating defensively. That was the difference in the game.”

Nolan notices early in the game that he is commanding the Beavers’ offense.

He completed all three of his passes early in the game, culminating with a 2-yard touchdown from Jack Coletto on a straight snap.

After Baylor’s 66-yard skipper went down to the right, the Beavers went 14-0 on their next possession, and a 6-yard touchdown pass to Zeria Besson extended the opening quarter to a 21-0 lead with 22 seconds Gave.

Hawaii found some aggressive momentum early in the second quarter, scoring a 12-yard pass from Cordeiro to Turner, taking a 21-7 lead.

Hawaii: Hawaii’s defensive struggle against the state of Oregon continued. After awarding 44 points in the opener at UCLA last week and 35 points to FCS rival Portland State, the Rainbow Warriors were scorched for a total of 558 yards by Oregon State.

Oregon State: Nolan gives the Beavers a double threat at quarterback and took advantage of his opportunity to replace Noir, a senior transfer from Colorado who was an All-Pac-12 second team selection last season.

Wide receiver Anthony Gould emerged as a prime target in the breakout game.

Hawaii: Cordeiro did not complete a pass, misfiring three attempts in the first quarter.

Linebacker Darius Moussou, Hawaii’s leading tackler in the first two games, was called for a targeting penalty at the end of the third quarter and was dismissed. He will miss the first half of next Saturday’s game against San Jose State.

The Rainbow Warriors were looking for their first win at the Corvallis since defeats in 2008 and 2013.

Oregon State: Gold came into play with a career reception. He took six catches for 106 yards in the first half and finished with seven for 119 yards and had his first career touchdown.

Sharp had the sack in the second quarter and the interception in the third quarter.

Olympians in the House

Olympic gold medalist Jade Carey, the newest member of the Oregon state gymnastics team, received an enthusiastic welcome from fans at Racer Stadium when she was introduced to the field after the first quarter. Oregon State freshman wins floor exercise in Tokyo Olympics. 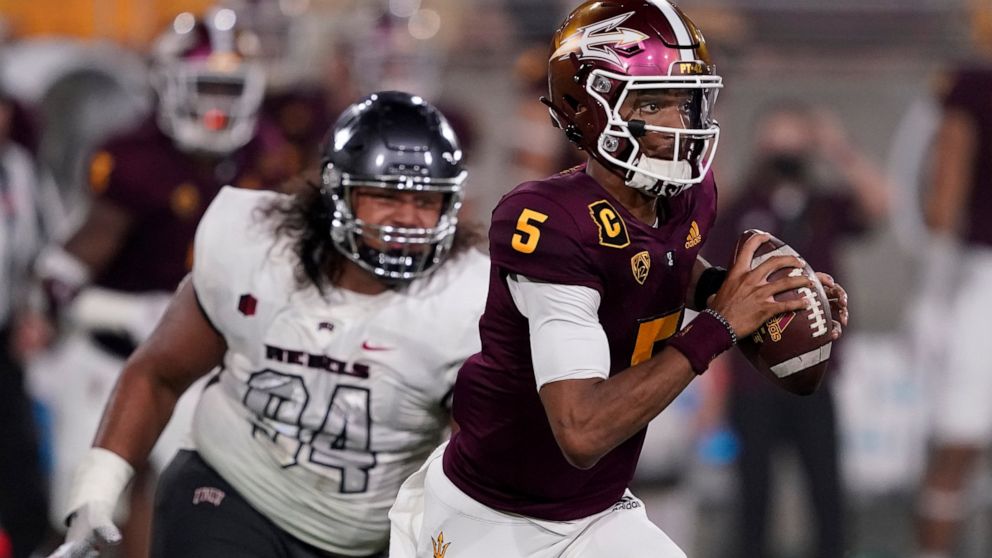